Henrietta Swan Leavitt, the “Star” Astronomer of the Universes' Distances

Henrietta Swan Leavitt  was the astronomer who discovered the relation between the variable brightness of stars and their pulsation periods, a mechanism the laid the foundation for estimating cosmic distances. Although her contributions were crucial for the further advancements in astronomy, she did not receive any public recognition of her achievements during her lifetime. The mathematician Gösta Mittag-Leffler tried to nominate her for the Nobel Prize in Physics for 1926, however Henrietta already had died four years earlier in 1921.

Henrietta Swan Leavitt started to work at Harvard College Observatory to measure and catalog the brightness of stars in 1893. This was a mechanical and low-paid job but she was one of the first women working in this scientific field. Before 1900 women were not allowed to operate telescopes.

By performing her job very accurately and drawing upon her knowledge, she was able to make an important step forward in astronomy by formulating a theory about the “period-luminosity relationship” of  Cepheid stars (i.e. starts with  variable brightness). She showed how Cepheid stars play an important role in astronomy as distance indicators, which explains why Henrietta Swan Leavitt is also known as “the woman who discovered how to measure the Universe.” Important further discoveries are based on her theory, including: 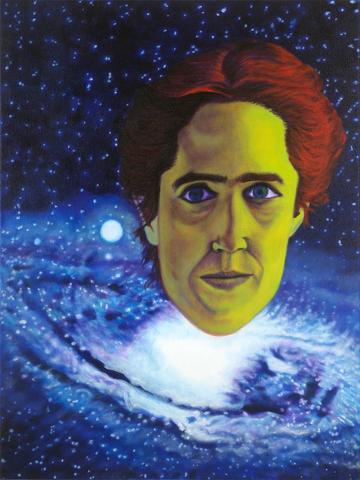 One day I woke up deaf. I had been sick, of course. It was winter at Oberlin College and walking to classes in the snow in my long dress gave me the chills, which led to fever. I returned home to get well. I woke one morning with my mother in my room. I could see her mouth moving but I couldn’t hear what she was saying. I asked her to speak up and that’s when she got the doctor.

My hearing aid helped, but I had to drop my dreams of getting a music degree. I was furious with myself to get so ill. I wished my body were as strong as my mind.

Through a friend, I got a job as a “computer” at Harvard Observatory. My principle task was to identify stars. Decipher how bright they were. I studied these stars as millions of bright blobs on fragile glass plates. For countless hours I studied stars, often well into the night. When I really needed to concentrate, I took out my hearing aid. The engulfing silence was bliss. I became one with my work.

In my184-page published report on the North Star Sequence, I combined data from 299 photographic plates taken by 13 different telescopes. It was the biggest challenge of my life as every magnitude had to be checked and crosschecked. It took me four years. But that was not my biggest accomplishment.

It was my work on the variable stars in the Magellanic Clouds that I made a theoretical leap. Variable stars waxed and waned in brightness like slow-motion beacons. Some of the variables completed a cycle every few days, others weeks or months. My job was not to speculate why, although I did. I noticed that the brighter variables have the longer periods, which meant you could judge a star’s true brightness from the rhythm of its beat. Then you compare that with its apparent brightness and estimate how far it was.

My theory was proven after my early death from stomach cancer. Edwin Hubble used my luminosity-period relation for Cepheids to determine that the Universe was expanding. In 1925, a Swedish mathematician wrote me a letter. He wanted to nominate me for the Nobel Prize. He didn’t know I had died. Although I admire modesty, I am thrilled to know my work was noticed.